KINDER Joy is a delicious treat made of two layers of soft cream – one sweet milk cream flavored and one cocoa flavored. There are two round, chocolate-covered wafer bites nestled in the creamy layers, which are filled with sweet cocoa cream, to be eaten with a spoon included. One half of the egg contains two layers of milky sweet cream topped with two crunchy wafer bites of cocoa cream. The other half of the egg has an exciting surprise toy.
Half an egg is all the space that Kinder needs to deliver creative toys that spark imagination and bring hours of fun. Each KINDER Joy toy is designed to surprise your children every single day. Besides being a surprise, KINDER Joy toys engage children through assembly, imagination, and interaction in order to extend the fun of playing beyond the initial excitement of discovering a toy.

Mystery toys are designed to engage kids through assembly, imagination, and interaction, for play that goes beyond the moment of discovery.
Toys may vary.

WARNING: Choking Hazard – Small parts. Not for children under 3 years. 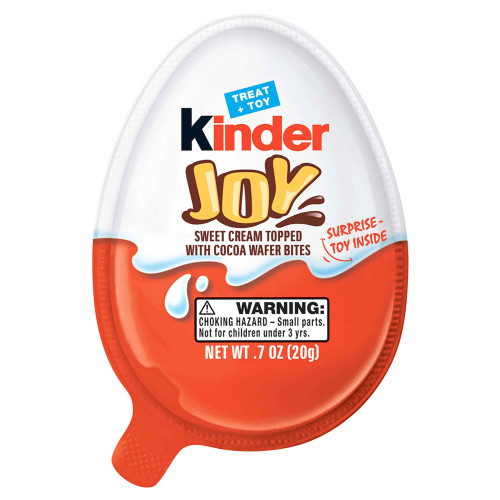