It's the story of a tiny marshmallow bear who has been the loyal and cuddly companion of many generations of foodies in the space of 50 years. An innocent enjoyment of being filled with tenderness.
From the workshops of Villeneuve-d'Ascq in 1962, the first official Little Guimauve Bear came to quickly become the guide, the Authentic Little Guimauve Bear that would amaze generations of gourmets. The recipe of one who has become an icon remains unchanged for over 50 years.
This Cemoi ourson of marshmallow, covered with a thin layer of crunchy chocolate milk, went through time. It remains timeless even today... Madeleine of Proust from our young years!

Young and old, between the ages of 7 and 77, our cub seduces all foodies. And if all the Little Marshmallow Bears in the world wanted to give their feet to each other, they'd go five times around the globe!

EAT ONE AT A TIME.

FOR CHILDREN 4 AND UNDER CUT MARSMALLOW INTO BITE-SIZED PIECES.

Children should always be seated and supervised while eating. 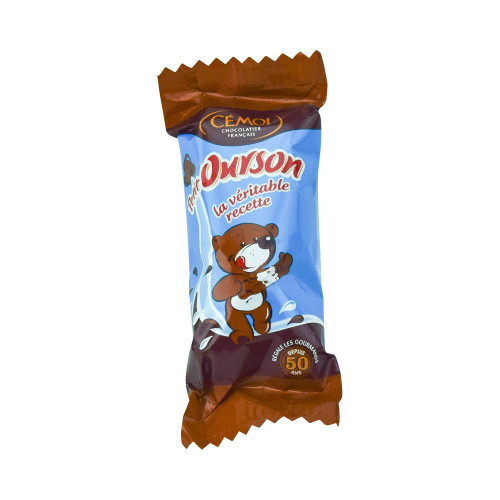